I have to say, this wedding was my ideal — fabulous food and company! Now, some readers may have been wondering what happened to the food portion of this food/needlepoint blog. Well, I’ve been trying to do the Nutrisystem diet for the past few months, so I didn’t want to bore you all with pictures of my (surprisingly tasty) prepackaged foods, but on Saturday we went ALL OUT! This wedding features a 10 course meal, not counting the passed appetizers and desserts! 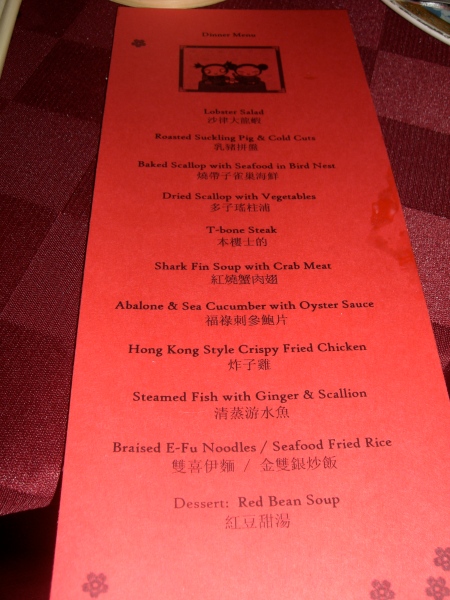 The appetizers included sushi, egg rolls, and bbq beef skewers. I only had an egg roll and passed on the others, knowing that a 10-course meal was coming.

The food came out one dish at a time over the course of 3 hours. The plates were all family style, but servers would come around give each person at the table a small portion. I tried all but one of the dishes, and they were all fantastic! I also tried to snap pictures, but I was often too caught up in the moment…

Course 1: Lobster Salad – This salad actually didn’t have any greens. It consisted of fresh cubed cantaloupe, honeydew, and pineapple with large pieces of lobster in what I think was a mayonnaise-y dressing. Although I’m not a typically huge fan of lobster, I really appreciated how light and refreshing the melon was to start the meal.

Course 2: Roasted Suckling Pig and Cold Cuts – Yum! The roasted pig skin was deliciously crispy — probably my favorite item of the night! The bright red item on the plate was a whole baby octopus. I was the only one at the table brave enough to try it, and I actually liked it. It just tasted like calamari, so if you can get over the fact that you can really see what you are eating, it’s pretty delicious. There was also cold-cut meat (that I couldn’t identify but was pretty good) and a salad of jellyfish and cabbage (tasted a bit like kim-chee to me, but it was probably just the fact that it was cured cabbage). This was also my first time trying jellyfish, and it had in interesting jelly texture — no surprise — but was otherwise very mild in flavor. It’s probably not something I would go out of my way to have again, but it was fun to try!

Course 3: Baked Scallop with Seafood in Birds Nest – I picked a bit at this course. The seafood was mostly shrimp, which is not my favorite. As you may be starting to realize, shellfish is not my favorite. I don’t love shrimp or lobster, and I think I’m allergic to crab. The baked scallop was really exciting though, baked with a creamy sauce and covered in cheese.

Course 4: Dried Scallop with Vegetables – This was delicious. There were many scallops resting on top of a bed of greens. The scallops were delicious, and I think the vegetable underneath may have been my favorite of the night — though I wish I could identify what it was! It tasted and looked a bit like spinach, but each leave had a long stem. Whatever it was, it was GOOD!

Course 5: T-bone steak – This steak was cut into bite-sized pieces and then breaded and fried. I only has a small taste (already starting to get full and only half-way done!), but the crispy coating was really interesting with the meat.

Course 6: Shark Fin Soup with Crab Meat – I was so excited for this dish, and yet so nervous about it. I’ve always wanted to try shark fin soup, but my mild allergy to crab made me approach this cautiously. I took a small taste and then decided not to push my luck because I was having too much fun to get sick! The soup base itself had a texture much like egg-drop soup, but the crab and other fish in soup obviously gave it a different flavor. I thought it was good, but not worth getting sick and missing out on the rest of the evening!

Course 7: Abalone and Sea Cucumber with Oyster Sauce – This was by FAR the dish I was most excited about. I have seen Sea Cucumber on TV so many times and wanted to try it, but had never had the opportunity before. The two fish were served over bok choy. Sea Cucumber has a really gelatinous texture that was very interesting. The weird thing about it was the taste reminded me of my grandfather’s potato kugel (the loaf version of a potato latke or pancake). I think this is because the sauce had an onion flavor and the sea cucumber flavor reminded me a bit of potato. Very strange. Again not something I would go out of my way to have again, but I am SO THRILLED that I got to try it!!!!!!! And, abalone is pretty delicious, too.

(in the picture below, the sea cucumber is on the right and the abalone is on the left)

Course 8: Hong Kong Style Crispy Fried Chicken – This was actually the one course I didn’t taste. With so many new and exciting foods to try, I wasn’t as excited by the fried chicken, though reports were that it was delicious!

Course 9: Steamed Fish with Ginger and Scallions – While I am awful at identifying the type of fish, I can say that it was excellent! The fish was brought to the table whole and the server helped us pull the meat off of the bones. The meat was perfectly flaky and moist. Yum

Course 10: Braised E-Fu Noodles/Seafood Fried Rice – Cheater! This was actually an 11-course meal, because these were 2 separate dishes. Though I didn’t taste the fried rice, the noodles were easily my favorite item of the night. I actually took home the leftovers of the noodles and can’t wait to have them for dinner!

Dessert: Red Bean Soup – I love red bean. It’s so delicious as an ice cream flavor or mochi filling. I had never had it as soup before, but it did not disappoint. The soup was served hot with tiny tapioca pearls. It was actually not very sweet at all, but the preparation brought out the wonderful mild sweetness of the red bean.

Dessert parts 2-4: With the dessert they also brought out a plate of sliced melon and pineapple, as well as a plate of cookies (sesame and…another kind I didn’t try). There was also of course wedding cake. Their cake was vanilla with a butter cream frosting and fruit used as a decoration. The cake was displayed throughout the night in 5 tiers on individual pedestals in a spiral arrangement. Very pretty, and most importantly, very tasty!!!!!

Overall – WOW!!!!! This was easily one of the most fun meals of my life. The great company and fabulous celebration made this a fantastic occasion. And the food…oh my…delicious and adventurous — what more could you ask for??

Congrats again to the bride and groom!!!

This entry was posted on Monday, May 25th, 2009 at 7:32 am and is filed under Uncategorized. You can follow any responses to this entry through the RSS 2.0 feed. You can leave a response, or trackback from your own site.