I used my day off on Friday to visit with family and consult with my family framer.

As I’ve tried to describe before both on the blog and to friends (and random passerby’s who see my dragon) my vision for finishing this piece is to tell the story of why the dragon in split into 3 parts. In my mind, this can be explained by the dragon hiding behind a mountain. My first thought was that this could be accomplished by finding someone to paint a mountain onto the matte. On my drive down the the framers, however, I thought it would be interesting if she could create a mountain out of appropriately colored mattes. It turns out that my beloved framer had the same idea, and as soon as I mentioned that I wanted to use mattes to separate the dragons by mountains, she came up with the same vision I had and was very excited about the piece. We easily picked a brown, tan, and green to create the mountains (and regretfully I did not bring my camera, so I can’t show you what it would look like). The sky was a bit more troublesome to figure out. I originally thought of doing a light blue, and then taking the matte sample so I could pick a background thread that matched. This seemed a little boring, however, and my wonderful framer came up with the idea of using a dark blue matte cut out in an arch shape, with the light blue background stitched into the piece. I think because of the cartoon nature of the dragon itself, this more cartoon look to the matting, combined with the angular mountains is a perfect fit. She was even generous enough to cut out some arches for me to hang onto so I can stitch the appropriate amount of background area without going overboard (Mom says she was so generous because this is going to be a very expensive framing job. Whoops! Thanks Mom!)

Note that in the pictures the dark blue is not the exact one I chose for the matte, but it’s close (and probably what she had in her scraps) 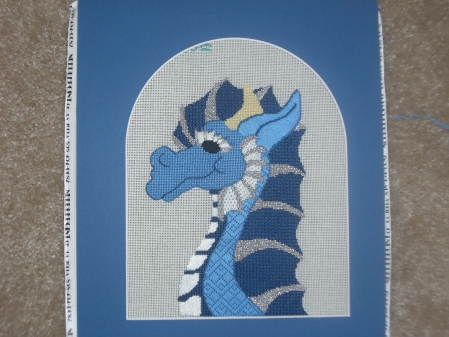 So here is the head in the arch (doesn’t he look like he’s peering out a castle window?). We all thought that it was a little too high, so when it gets framed, the window won’t be so tall. The next picture shows it skooched down a bit, which we all prefered. The only thing to worry about when stitching and framing now is to ensure that the dragon’s head and tail windows are the same height, which probably means a little extra background stitching for me.

Of course the middle is missing here…and that’s because I’m still working on it and she didn’t cut out an arch for me.

Finally we had to choose a frame. While I think I’m pretty good at finding the right matte color, I stink at finding frames. I let my mom and the framer run around the store bringing me back options for quite a while until we found the PERFECT one! It is silver, and has 2 staggered rows of alternating triangles and circles. That description does not do it justice, but trust me when I say that it works perfectly with the angles and the smooth curves of this piece.

Now, with all the decisions made, I only need to finish the piece. I don’t expect it to be done before August, but I’m glad I made the decisions now so that I can just give it to my mom when it’s finished and she can take it to the store (which is 5 min from her house).

Oh, and for the background stitch, I think I’ll use cotton floss even though the piece is currently all in silk and matallics because I want something that will lie very flat to the canvas…but as always I’m open to both stitch and thread suggestions!

This entry was posted on Sunday, July 5th, 2009 at 3:25 pm and is filed under Uncategorized. You can follow any responses to this entry through the RSS 2.0 feed. You can leave a response, or trackback from your own site.